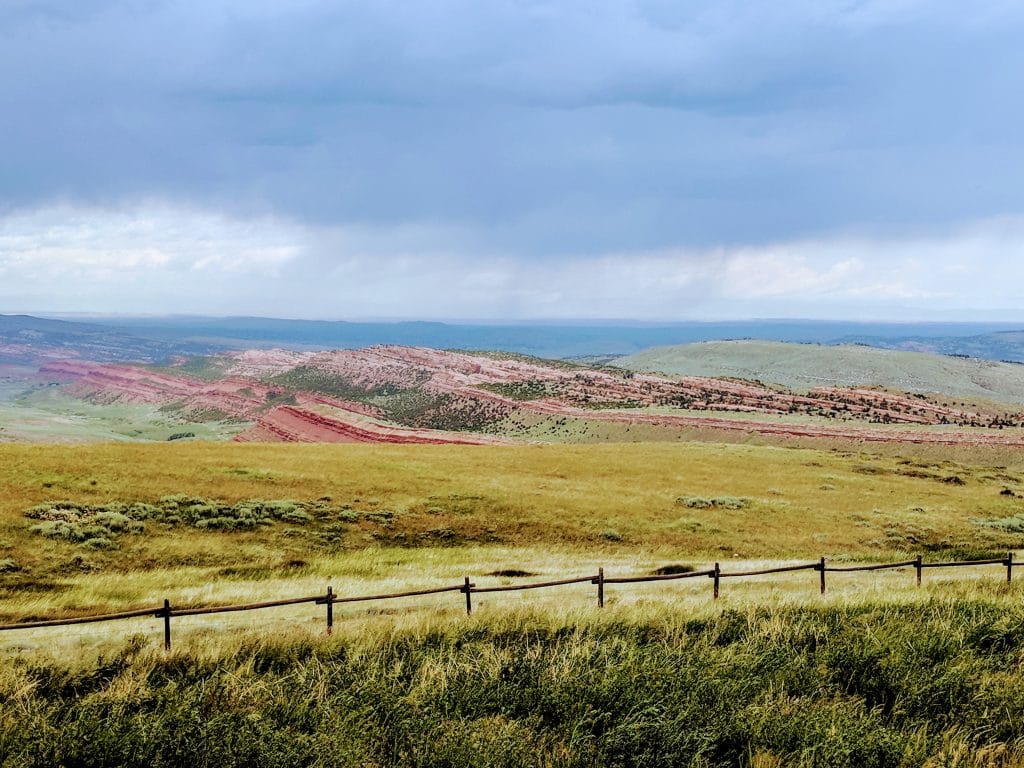 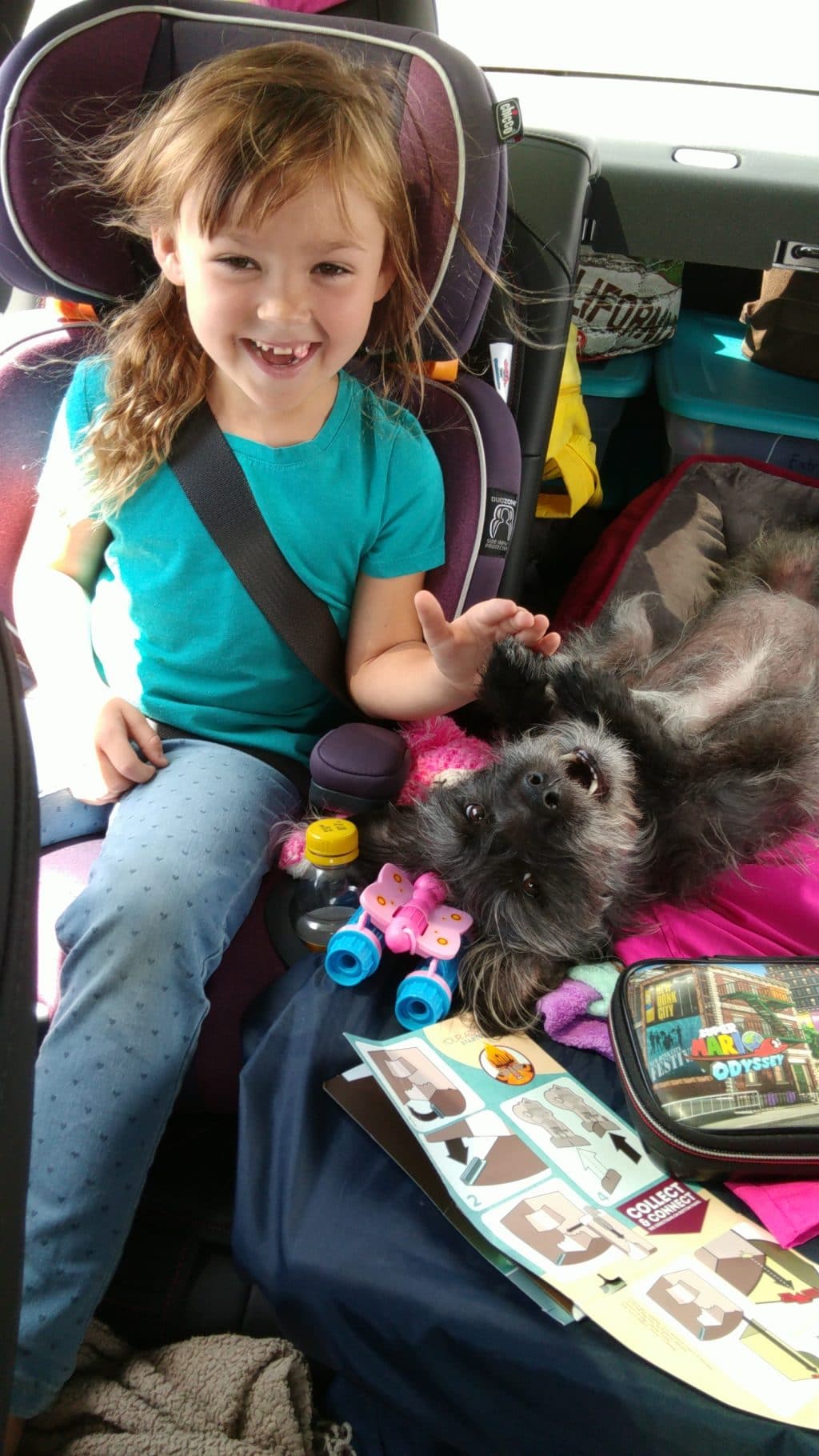 The night before we left, Alexa was so excited that she had troubles falling asleep. She finally crashed out around 11pm. In the morning, I woke her up gently by telling her it was time for our road trip. She smiled with her eyes not even open yet and in her grainy morning voice she softly said “yay”. I had let her sleep in her ‘road trip’ outfit that she had picked out instead of pajamas and our car was completely packed the night before so we were ready to go!

By the time we had rolled down the tollway towards our destination, La Verkin, Utah, the sun had popped up and we had the most beautiful view of the California mountains! The sun continued to shine down and by noon it had reached 100! Ugghhhhh, not a big fan of hot weather! 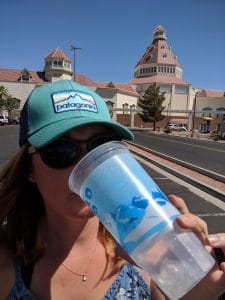 We stopped at Primm, a popular stop just before you hit Las Vegas, to charge the car and grab cups of ice for us since it had reached around 112. It was painful just stepping out of the car and walking the 200 feet from the chargers to the convenience store. Pebbles stayed in the car where she had her little bed and it was a cool 68 degrees…lucky dog! We had to keep a sign on the dashboard saying “AC IS ON” because we didn’t want anyone breaking into our car to try and save our dog.  One of the best untold benefits of having an all-electric Tesla is the ability to turn on and control the air conditioner when your away from your car!

Was it a miracle that we were happy campers the entire way? No…pinterest saved the day with that white three-ringed binder! I’ve mentioned it before, but I’ll explain it again. It’s a white three-ringed binder, some zipper pouches on the inside that hold stickers, post-its, twistable crayons, and the glorious dry erase markers! Alexa mostly used the dry erase feature on this bad boy which was perfect for me because I could simply take a pic of her masterpiece instead of storing it somewhere! We had her Nintendo Switch, my phone and wireless headphones to watch Netflix on, and the binder…she chose the binder waayyyy more than I expected! 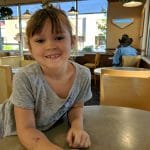 We made a quick stop at a Wendy’s restaurant. We ordered our food and quickly found a table, next to “a REAL COWBOY!!! – Alexa”. Alexa was too star struck to go say hi and didn’t even want me to introduce her (very unlike her). We opted for this picture instead.

Ok, since we are on the subject, I just want to thank Wendy’s for adding strawberries and blueberries as a side option for kids. So awesome, I just wish they had it at every location! PS, does anyone love their chili as much as I do? Ok, I’m done 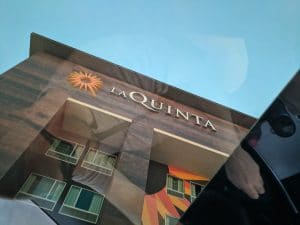 Here we had finally arrived at our destination. We had chosen the La Quinta in La Verkin based on the fact that they had not only a Tesla destination charger, but they also accepted dogs. I feel as though when Tesla chooses a hotel where they install their destination chargers, that they do so with purpose. This place wasn’t expensive, it wasn’t lavish, but it was very well kept, and very comfortable and it had everything we needed! The breakfast was delicious. It was the typical continental breakfast consisting of waffles, eggs, bacon, fruit coffee, juice, muffins, and yogurt, but the breakfast area was big and open and I didn’t feel cramped or rushed. The beds were comfy and the shower was amazing, it was the perfect stop to unwind! The other benefit of this place is that it is really close to Zion National Park. It’s one stop that we wanted to take but had to make a tough decision to skip it because of the weather. We wanted to make a quick trip to see the Emerald Pools, but at 112 degrees it just wasn’t going to work. We aren’t terribly far, so we will make it back one day. 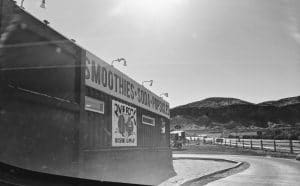 In the morning we left la Quinta happy, rested and ready for more! Scott cannot live without morning coffee (like a whole pot) and I had made a mental note of this quirky little coffee place next to our hotel the day we arrived. He asked if they would be able to fill his behemoth coffee mug (32 oz). They said they could measure out one of their taller sizes and charge him that price. They ended up filling it up for only $4! If you’re interested it’s called River Rock Roasting Company.

Ok, we had Scott’s coffee in hand, the dog was fed and walked, Alexa was fed, we had the car repacked with our hotel bags, and our car was already fully charged thanks to the Telsa destination charger! Let’s hit the road! Ok, so we noticed a theme in this area…hurricane, Utah, and each town after it had their initial on their own mountain, how cute!

Off to Evanston, WY we drove. We opted to not stay at a pricier hotel that had a Tesla Supercharger, but instead, stayed at the Comfort Inn and opted to sit and charge it for this particular stop. The rooms were OK, but the pool area was pretty gross and outdated. For dinner we attempted to eat at a golf course near town, but it was closed

due to a charity event. We were lucky enough to meet a couple of gentlemen that directed us to a little mom and pop diner called Jody’s Cafe. The place doesn’t look like much, but it was amazing! I opted for breakfast and ordered eggs, toast and sausage. The toast and sausage tasted homemade. My husband ordered some sort of roast beef concoction, which I would never order at a small diner because I’m not that brave…it usually tastes like microwaved meat with boxed mashed potatoes, but, this was NOT the case here! He gave me one small bite of the real mashed potatoes before he devoured his whole plate! My daughter ordered pancakes and they brought her a cute pancake that they shaped into a smile, she loved it!

Getting Closer to Yellowstone

We knew we were going to drive to the east side of Yellowstone, however, we weren’t sure what charging options they had once we left Evanston. I had mapped out a little town called Riverton, Wy as an option, but with a little digging Scott found another restaurant, the Breadboard Sandwich Shop in Buffalo, WY. The mountains on the way up from Evanston to Riverton was unbelievably gorgeous, untouched, and just rustic. I absolutely fell in love! 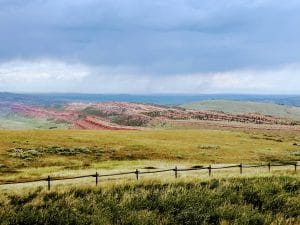 The ride from Riverton to Cody was just as impressive…towering cliffs, mountain tunnels, a huge dam, gorgeous rivers, animals, we loved it all! Scott was happy (I think he was secretly sad) that we were finally dropping our dog off at Cody Country Bed & Biscuit for the week. I was ok with it because I knew she would be spoiled here. She had a poolside room and a huuuuuge backyard to play in! The prices were actually pretty amazing for what they offer.

We met up my brother and sister-in-law at the Sunrise Inn. It was comfortable and clean but that’s about it, my daughter, on the other hand, fell in love with the place instantly. When she first opened the room she said “IT’S BEAUTIFUL, its the best one [hotel] yet!!!”. She has a way about her that just fills me with joy and this is a wonderful example of that. The day we arrived it wasn’t warm at all and drizzled on and off so going in the pool was out of the question, but she wasn’t bothered by it. Alexa had her baby cousin and a beautiful rainbow to look at and that’s all she needed.  For us, the glorious part aside from her and finally meeting up with family was the fact that right next to the Inn was the charging station at Buffalo Bills.

After we all settled into our rooms we needed to get the kids some food so we went downtown to find a good family restaurant. We were surprised to come across a gun show right in the middle of the street which happens every night at 530 pm. If you’re interested in getting seats for the show (not necessary, but nice), here is the link Cody-gun fight show.

The kids tummies dictated our evening plans so the entertainment would have to wait. The only words my sister-in-law saw was the word “grill” and we were sold. The place we stumbled into happened to be Irma’s Bar and Grill which is an iconic restaurant and hotel. Follow this link, Irma Hotel, if you’d like to read the story of Buffalo Bill and his daughter Irma.

The town itself is a cute tourist town with many restaurants and shops all on one street. There is even a local park with a small playground. The lot is shared with a mini golf course that is run by the city and get this, it’s only $5 for adults and $3 for kids! Mini Golf.

One last thing before I go…

I guess the rodeo located at the edge of town is the thing to do, we didn’t go, but maybe next time!? Here is the link, if you check it out, let me know how it was!

This site uses Akismet to reduce spam. Learn how your comment data is processed.

Subscribe to receive email updates! Catch all of the latest posts and news from Rockets and Tutus!